Stamps in Africa - symbols of adinkra


Seals and stamps entered the history of mankind at the first need not just to create a single image, but also to multiply it. Different people unequally used in this invention. Add a bit of history and African flavor to our blog about seals and stamps and talk about the symbols of adinkra.

Symbols of adinkra used in Africa by a group of Ashanti peoples, living in the Central part of Ghana, as an analog of the familiar letter. Like hieroglyphs, these symbols carry many full meanings. This is their distinctive feature in comparison with the letters of the alphabet, which acquire their own meaning depending on the context and combination with each other. 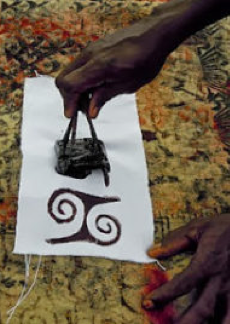 Adinkra used by local craftsmen for packing cloth, they can be seen on pottery, or an ornament on the walls of temples. In ancient times, the seal could be made armed with a piece of wood and a pointed object. But not everyone was doing it. Sometimes by printing the wizard was much easier than trying to do it yourself. Made of wood stamps dipped in paint and left a picture on the fabric. To fix it, you had some time to hold the material over the fire - so the paint is better imprinted and longer remained on the fabric. At the same time, the size of the print, the shape, and what was depicted depended on the imagination of the master and the manufacturer. But nowadays anyone can create a seal or stamp in online stamp maker.

Modern Ashanti perceives adinkra as an element of their own cultural identity, but few people can easily read them. Each family has objects decorated with symbols and inherited. They are considered family heirlooms and are carefully preserved. Now create the seal itself is not difficult. Small symbolic images are still applied to clothing and household items, although not everyone is able to recognize the value of a particular element. This can be compared with traditional ancient Slavic symbols used in embroidery, or with hieroglyphs of Egyptian pyramids.

We managed to collect some values of the most common characters in adinkra.