Choose the material for seal or stamp flash rubber photopolymer

Thank you, Your order is working! We'll call you soon.

You can continue edit stamp or create new

Continue
New stamp
Select the shape of stamp
Round stamp
Triangle stamp
Rectangle stamp
Cancel
Create
Have you checked the spelling?
Please note that the manufacturer is not responsible for spelling errors and the correctness of the entered data.
Yes, continue
No, check
Missing text
In the elements [ ] are missing text in the input fields. Enter the text or delete an item by clicking the cross next to the item number
Yes, continue
You want to download the print layout
View
Download
Download
Download
Download

After payment, a button will appear in the stamp generator

to download the layout, the same layout will be sent to your mail(If the button does not appear, refresh the page by F5).

Specify your e-mail
By clicking on the 'Pay' button, I accept the user agreement

If the payment page does not open, do the following:

1. Disable the Adblock plugin (or other ad blocker.

You want to save the stamp layout

Write to your mail with a link to the saved layout.

Save
Cancel
Saving in progress
To display the stamp designer of the mobile version, click on the button below
Stamp designer

When choosing what to make a seal/stamp from, we see options, the number of which, in General, is small - only three. This is the usual rubber for most people, a much cheaper photopolymer, and a certain new technology called flash seal, which does not need to be smeared with paint.

But when you decide to buy a stamp, three possible production technologies are stumped. And really, what is better? Does not a low price equal a low quality? And what kind of multi-color flash seal is it, how does it work, and is its high price justified? We will help you figure it out and start with the most obvious option.

Widely used rubber has long established itself as an ideal material for making seals. A computer-generated layout is transmitted to an engraving machine, which uses a laser beam to create a relief image on a piece of sheet rubber.

Since the laser is involved, the cutting is extremely clear, with high resolution and almost no distortion of the layout. The image may include small details. Rubber seals and stamps are suitable for you if you want to have a strong wear-resistant product for which any type of ink is suitable. Additional advantages of the rubber, you can take it undemanding to storage conditions.

The impression is clear and bright, and the price range is in the middle between photopolymer and flash printing since good laser cutting equipment is not cheap. 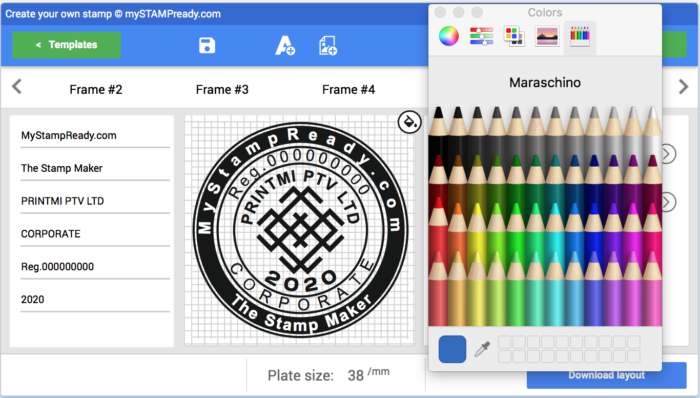 Photopolymer-for those who want to save money. Almost no special equipment is required here. Our reader is probably familiar with the material from the services of a dental office - now they make fillings from photopolymers. Both in dentistry and in the manufacture of stamps, the same property of the photopolymer is used - to harden when irradiated with certain rays, usually in the ultraviolet range.

The layout is printed on a transparent film, through which a liquid photomonometer is irradiated; transparent sections of the film pass rays to the places where the cliche should have relief, and in these areas, the monomer polymerizes, that is, in other words, solidify; the uncured areas are washed to clear away excess material.

The method is cheap and common, but such seals will not last long. In addition, the paint suitable for them should not be alcohol-based, since it damages the photopolymer.

The most expensive of the options presented. The material for this type of seals and stamps is still the same rubber, but a special one - with micropores that can absorb the paint, so the flash stamp is also called paint-filled.

Flash seal is flat, there are no protruding elements on it, it does not need to be dipped in ink, and yet it gives a clear impression, and even multi-color. You can use as many as 6 colors at the same time, the colors on the impression do not mix, but on the contrary - give a clear image.

How is this done? Through the micropores. Each ink-filled seal is made separately (this is not very suitable for those who need a large batch) - the microporous rubber pad is filled with paints, which subsequently leaves an imprint when the paper is touched. One refill is enough for ten thousand prints, and you can refuel the print an unlimited number of times!

It would seem that there are solid advantages, but there are also disadvantages. First, flash seals and stamps are gentle and do not tolerate strong heat or strong mechanical influences, so someone will have to get out of the habit of putting an impression with a sharp blow. Secondly, the technology is new, it uses special equipment and special ink, so flash seal/stamp significantly hits the pocket.

But other new technologies also do not standstill. Even now, you can significantly save on designer services with the help of the online seal designer mystampready, which does all the same things as it does. And instead of going somewhere several times, you can order a seal online. So why not give another new technology a chance?